There are some important events happening in Tamarra now that offer great opportunities for interesting adventuring. Read on to find your spot!

The Wars of Above and Below: The Tamarran Continent at War with the Sightless Nations 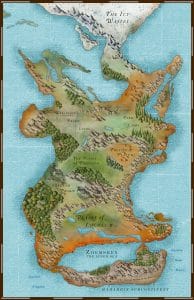 There have been some huge earthquakes on the Tamarran Continent over the last twenty years, with the most recent occurring in the year SP~5,005.  Large cracks in the skin of the Continent have opened up, with the deepest ones revealing previously unknown realms of creatures that have lived below the surface of Ethem, without sunlight, for many years.  Believing that the earthquake was an invasion, they fought back.  Beware: there are periodic excursions by raiders from down below, and there are also rumors that several of the most powerful underground nations have allied with some nefarious powers above-ground and are plotting a large-scale invasion.

The Dwarf Clan Disputes and Invasion of the Undying Lands

The many dwarf clans that live in the southwestern part of Tamarra are on the verge of war with each other.  Their disputes have spilled over into the Undying Lands, which are near the homes of some of the strongest clans.  We know that there was a failed attempt by the Kardash dwarf clan to invade the Undying Lands, which are wealthy and generally peaceful; it is unclear what became of those invaders. That has not stopped the other dwarf clans of the southern half of the continent from carrying on their blood feuds.  It will require great diplomacy, or perhaps some friends in high places, to navigate this area of the continent; if diplomacy doesn’t work, it may require some good fighting skills!

These creatures are some of the most cruel and merciless monsters currently on the Tamarran Continent.  They were brought to Tamarra over thirty years ago by the Nulentians, a race of creatures that live across the eastern oceans, in their most recent attempt to invade this continent (SP~4,970 – 4,974).  The Nulentians had designed (or bred…or both) these creatures to have a bloodlust that overcame all thoughts of self-preservation or mercy toward their perceived enemies.  The Nulentians were beaten back, as they were in their prior two attempts; but in their attempt to flee, they left behind many thousands of these terrible creatures.  Now (mostly) leaderless, they wander the roads and fields of the continent, looking for something to kill.

The Galguhn War and the Northern Goblin Uprising

This bloody conflict ended less than 20 years ago in SP~4,988, but the repercussions continue.  The Nashem Mountains are filled with an increasing number of goblins and other unpleasant creatures; gurv, gamol, and ravagers**, to name but a few.  This threatens Naldrin City, which lies at the very southern extent of these mountains. The old parts of the city, on and beneath the mountains, are particularly dangerous.

The Stillness Wars and the End of the Quay Empire

The Stillness Wars, between the Quay Empire and a large number of undead, were one of the major wars of the last 50 years.  The Quay Empire lost, and as a result there is a large swath of territory across the middle of the continent where undead roam freely, making travel perilous.  Guides, and some good mercenaries, are highly recommended.

This is only the beginning of the story, since there are many other things going on throughout the Tamarran Continent.  Stay tuned for subsequent blog entries!

*The history section of our rulebook, Beyonder: The Science of the Six, also gives a brief view of current events.

** See Imbelnhi’s Bestiary: Being a Traveler’s Account of our Continent and her Creatures for information about these disturbing creatures.