Most GERC members agree that the Wyrd Division is a little… off. Almost every member of the Division has transcended at least one Barrier in Shadow. They study Wyrd energy, a corrupted version of one or more of the fundamental Six Energies that make up the world, with some application to more practical, applied areas like automaton development. 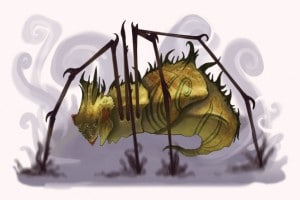 The Wyrd Bug (a creature of corrupted Shadow Energy)

Wyrd Energy is a bit of a riddle, as no one is quite sure what it is. Some researchers argue that it’s a true “Energy” in the capital “E” sense of the word: a fundamental building block of the universe. Others argue that Wyrd is actually a breakdown product from extraplanar umbral interactions with pentEnergetic superstructures.  …which is to say, in layperson’s speak, that they think Wyrd is what happens when Shadow degrades Energies on planes other than our own, then those degraded Energies leak back into our plane. This would explain the strange ways in which Wyrd sometimes imitates other Energies; maybe this is because it has little remnants of those Energies left in it, small scraps that in some faded way imitate what they used to be.

As a case in point, the Wyrd Division works with the Materials Development Division and the Energetic Experimental Group to develop automaton technology – the technology that powers machines to move, work, and (to an extent) think without the benefit of Spirit, Body, or Mental. Perhaps this is because the Wyrd that powered them is a kind of chewed up version of these Energies. Maybe this is why Shadow can wield some small control over these machines.

The current head of the Division is Kemmfaut Lap-Kep, a wellyn who has achieved the remarkable feat of transcending three Barriers in each of the six Energies. One of her eyes has a bright purple iris, while the other is completely white, with no iris or pupil at all. She has no tongue – she speaks in Quen sign language – and scars cover her face and body. Stories abound throughout the GERC of how she came to be this way: was she born with those eyes, or were they the result of some strange ritual? Did she remove her own tongue, or was it taken from her?