To Fight… Or Not to Fight: Physical Combat

All good stories center around a conflict.  Many times in fantasy worlds this conflict is an epic battle of life and death, with blades slashing at flesh and supernatural abilities in their many forms saturating the scene.  Beyonder can be full of these —  in fact, the majority of the rules revolve around this type of conflict situation and how to manage them.  We call this Physical Combat. (Note: not every conflict is resolved through physical combat, as you will see in our next blog entry.) 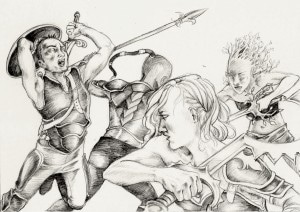 In Beyonder, when there is a combat situation it is your job as Moderator to keep track, in an organized fashion, of everything that is going on.  If you don’t, then a simple battle that takes place in a matter of seconds in the game world can take an hour in our world.  Below are some tips to keep things moving along.

Reaction Time: At the beginning of combat everyone (both the PCs and the creatures you control) will roll to see who has the fastest Reaction Time (a special use of the Perception Talent).  To save yourself some hassle, if you have a big group that you are controlling you may want to roll once for the lot of them.  Generally speaking this order stays constant throughout the scene, so you should write it down and cycle through it.  If you are using the Tracking Wheel (and we suggest you do), then you can arrange the pieces from the center outward in order.

Know Where You Are: Encourage your players to know where they are and where they want to be.  It is not unusual in a combat situation to wait in the back, or somewhere out of the fray.  Especially if you are in a support role, you want to make sure that you are out of harm’s way while you come to the aid of your colleagues.  Also, there are times when you want to run — it might be toward an enemy or away, or perhaps in pursuit of someone, or something, else.  So, think about where you are now and where you want to be a few moments down the road.

Time Limit: One way to keep things moving in a combat situation is to set an amount of time that players have to make their choices.  A countdown can definitely help to focus the mind.

Tracking Wheel: Use the Beyonder Tracking Wheel to help you and your players keep track of where things are wrt who goes next.  Don’t hesitate to pull out a sheet of paper and quickly sketch out the “lay of the land,” placing each PC and NPC on the board so they can actually see where everyone is.

Separating the group: If you’re an experienced Moderator, it can be good fun to occasionally separate some of your players from others.  You can physically separate the two groups — “you all go in the kitchen, and the rest of you stay here.”  Each (smaller) group is then fighting their fight, but also wondering if the other group is okay or just what’s going on with them.  Don’t leave either group alone for too long, but having some time to themselves can be helpful for each group to discuss strategy and decide on future actions.

Not every story is about physical combat!  The Beyonder system gives you many other options, which we will discuss in our next “How to Moderate” entry.