This blog post is written as a newspaper column from the in-game personality, Clara Flettwell.  Clara is a reporter for one of the largest newspapers in Naldrin City, the Naldrin City Expose.

More of Clara’s columns can be found in our BeyonderRPG Patreon and in upcoming blog posts.

A weekly column about everything Naldrin City

By Clara Flettwell, Reporter at Large, the Naldrin City Expose 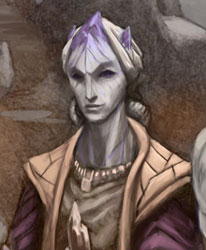 A few days ago I and my good friend Lorleena decided to visit the ishiri Temple of Ocheegogo (OH-chee-go-go).  This still active house of worship is a little known jewel in the Naldrin City region. It is considered one of the great architectural wonders of our region and one of the greatest examples of ishiri architecture on the Continent.

The temple is maintained by an ishiri organization known as the Okogans.  For many centuries they have kept the temple in pristine condition, and protected it from the general public.  On occasion they do offer tours to small groups of select individuals. My cousin Lorleena and I were lucky enough to join one of those groups on a recent afternoon.

What strikes you first, as you see the temple from the roadway, is its height and slender grandeur.  It rises over a hundred feet into the air above the surface of Old Naldrin Way, the ancient roadway that winds across the steep mountain ranges from the Second Tier of Naldrin City deep into the abandoned parts of the ancient city.  A warning to all travelers — the road beyond Ocheegogo is not safe and should be absolutely avoided!

The inside of the temple is even more spectacular.  The broad stone doors open easily into a long hallway with high vaulted ceilings, lined on either side with one alcove after another as far as one can see.  It is well-lit by lamps of a strange design that hang from the walls.

The alcoves, each dimly lit, varied in size.  With the help of our guide, we quickly discovered that each was its own history lesson.  The alcoves nearest the front doors we had just entered were the oldest and those with the most recent history were furthest away.  The walls of each were covered with friezes, paintings, and intricate abstract designs that told stories about the ishiri and our city.  Some stories were of heroic individuals. Others recalled great feats performed by the ishiri folk or individual clans. The ceilings often had their own art works to embellish the story told in that alcove.  Many of the larger alcoves held display cases or lecterns for maps, books, and other writings that seemed very ancient.

Our ishiri guide, a female named Gagallo, was patient with us, willing to take as much time as we needed to explain the artifacts we were seeing and the history they represented.  There seemed no end to her knowledge.

Near the end of our hours-long visit, I asked Gagallo if there was an alcove for Drawnwyn and her crown of Seven Eyes.  It is hard to read the reactions of an ishiri, but over the years I have known many and many of those are my friends. I could see that she was surprised at the question and somewhat disconcerted.  I immediately felt the gentle probes of Energetic Powers, likely Physic Energy, trying to detect my capabilities and what I might have in my possession.

Gagallo quickly told us that those collections were under repair and not available.

“I am sorry for the inconvenience,” she said.

At that moment several guards approached Gagallo.  They were clearly letting her know that the tour was over.  Seeing these well-armed soldiers prompted me to notice that the temple had been well-guarded since we entered.  Allowing others into their temple was obviously something the Okogans did not do lightly.

We thanked Gagallo and the guards for a wonderful and instructive afternoon. They bowed in the customary ishiri manner and stood at the doorway as we made our way out of the temple, back to Old Naldrin Way.

For Lorleena and I the journey back to the city was filled with lively discussion of the many wonders we had witnessed, and great curiosity about the things we had not been allowed to see.

If you are interested in the history of our city, the ishiri, or just a bit of mystery, the Temple of Ocheegogo should most certainly be on your to-do list.