Wyrd energy? Yes, it’s pronounced WEERD, Quite useful. It powers automata, makes those Wyrd devices work – brings in quite a bit of business for non-channel craftsmen – you can even find it in some of the more luxurious homes on Tamarra. I know a Zweyjen down in the Third Tier who had a Wyrd-powered bedwarmer. Poor fellow never quite got over that move up from the South.

I’m afraid I can’t tell you much about what Wyrd Energy actually IS. We know how it behaves in certain situations, yes. We know it can be used to power automata, and give them at least some semblance of… well… understanding. Responsiveness to commands, at least; it’s difficult to judge whether their obedience constitutes true understanding, although, make no mistake, that’s a matter of hot dispute in certain philosophical circles. It can be used to create items that rival Energetic artifacts in terms of power, and as an energy source in more mundane creations. But, when you gets down to it, Wyrd is, well, Wyrd. 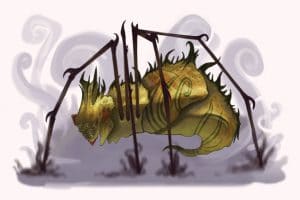 Some of my more… adventurous colleagues have gone so far as to suggest that Wyrd is an Energy, in the same way that The Six are Energies. But our current understanding of the world points to The Six as the solid core of all creation. It is my opinion that Wyrd, like Stillness, is something else, which we do not quite understand. Perhaps it’s an energy, with a small “e.”

[…Unintelligible interjection from the crowd…]

What’s that? Oh yes, well Ms. Lap-Kep does have some…interesting beliefs about The Six. Some theorize that Wyrd is a sort of corrupted mirror Energy, opposed to Physic. Just as Physic creates a logical and consistent set of rules for our material world, Wyrd produces a set of rules that are… coherent, at least. Regular. However, these rules fly in the face of the normal Physical laws that govern our world; it creates motion where things should be still, and stillness where there should be motion. It can transfer momentum with no physical contact of objects, and increment the energy of a system by an amount greater than the amount of Wyrd applied. By all accounts, it does not jibe with The Six.

Wyrd is a very powerful energy, whether it’s spelled with a big or a small “e.” And, if its current applications are any hint as to its future potential, it’s something that we will continue to research for some time to come. Now, where was I? Ah yes, the rise of Energetic commerce in the Jowea Region. You see, it all began with the Quiets..